Anchor Up, Leaving The Ambracian Gulf <<<         >>> Westside Of The Peloponnese
Agia Effimia on Kefalonia 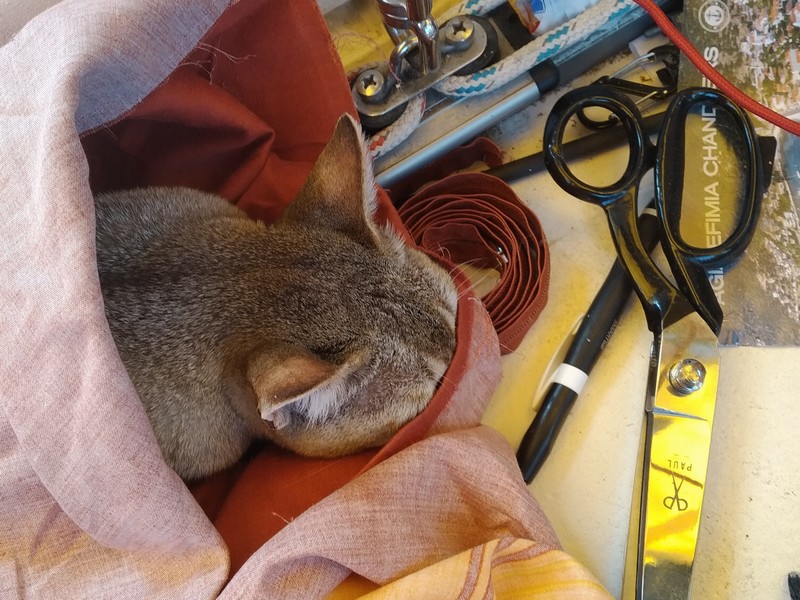 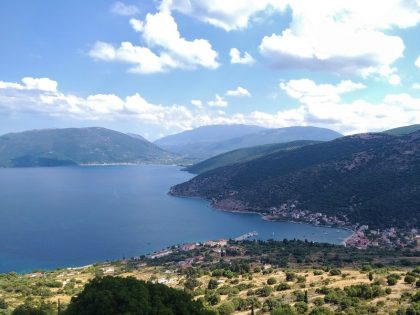 View from Agia Effimia to Sami

From the southern tip of Ithaca we leave for Kefalonia after a quiet night. Next destination: Sami, about 7nm, so just around the corner. Arrived in Sami we realize that we don’t want to stay here. Guts and head are against it and if they agree, you should definitely listen to them. Thus we extend the distance by 3nm and later we reach Agia Effimia. In this small, protected bay you can anchor, but also moor at the pier and get water, diesel and electricity. We anchor of course. Just to avoid tempting Randy to go on shore excursions again and because it is more pleasant overall.

It quickly turns out that we already know people here. The sailing world is really a small one. In Vonitsa, our last winter quarter, we met Mariette and Jorgos. Jorgos is harbour master here, Mariette works online from her boat and after the end of the season they want to go sailing again for some time.
We have such a good time here, that we decide to make a parcel stop. So we stay until we could receive some mail 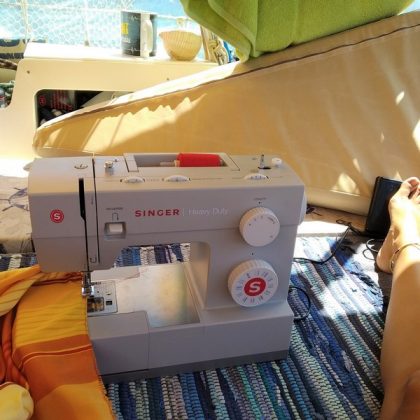 orders. Thats always a bit of a problem without having a permanent address. We can use the one of the local Chandler as receiving address and are already looking forward to the various little things from home. Our two mates get a visit from Klaus from Austria in a few weeks. We are also allowed to use his address and I have a sewing machine and some accessories sent to him, which he safely brings to Greece. Who would have ever thought that I would be interested in a sewing machine and would even be happy to own one? 😀

Altogether we stay almost 6 weeks in Agia Effimia. During this time we visited Argostoli twice and once we had a rental car for one day to explore the island. Furthermore a charter boat with Brits in the anchor field crashed into our bowsprit. The pulpit bent, the railing net torn, the initial shock was bigger than the damage.

Now, after we have spent really enough time here, observed the weather for a long time and compared different calculation models, we continue. On to the west… 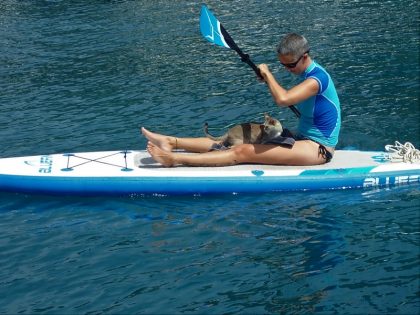 The day we leave Greece has finally arrived. Early in the morning we pick up the anchor and set off. The weather is, as predicted, fantastic, the wind just right and we sail again after the long break. After a few hours on the water, 20nm away from the land, it gets dark, it cools down noticeably, when out of nowhere a thunderstorm builds up behind us. Shortly afterwards we find ourselves in the middle of a thunderstorm cell. Around us the water seems to boil, it is raining cats and dogs. Tiki swings wildly from side to side under reefed sails, we consider turning around. At some point the spectacle is over again, above us blue sky, but all around everything grey, lightning, thunder, we are in the middle of it. We don’t want to turn around, we would have to go through the thunderstorm again and so we think about what would be best. Shortly before nightfall I see a dorsal fin in the waves, there, another one, and another one. A huge dolphin school accompanies us for a long time and convinces us to finally continue the way. Again and again a great experience. In the coming night we alternate with the night watch and the next day starts.

Although we have made it through the thunderstorm, 50kn wind, waves of 3m and more, the mood on board is overcasted. Something is bothering the both of us. Before the second night starts, we make another decision that will change our mood suddenly. Halfway between Kefalonia and Sicily we realize that it is too early to leave Greece. We have seen far too little, we are missing the wholehearted Greeks already and to top it all off, the last feta has also been eaten. The decision is obvious. We turn around.

Hardly finished with the manoeuvre, peace spreads in us. We have the feeling of going home. After a total of 3 nights, 69 hours and 254nm we arrive in Zakynthos, only 30nm away from Agia Effimia. Again in Greece. We made the right decision and enjoy a good night’s sleep.

We spend 2 nights on Zakythos, one alongside in one of the countless “Agios Nikolaos” which there are in Greece at apparently every corner. And another night, anchoring again as usual, in a small bay near a sulphur spring. All in all there are far too many “Tourist-boats” in the waters on Zakynthos and so we head for the Peloponnese on July 22nd. There we should be spared from high speed boats, glass bottom boats, excursion boats, and charter boats, as far as we could find out.

2 thoughts on “Agia Effimia on Kefalonia”