On November 16,2017 the time had come. Early in the morning we start our way to the south in a good mood and warmly wrapped up.

The temperatures are not so cosy here anymore, so we have several layers and close everything under deck to keep the cats warm as long as possible. A fatal mistake, as it will turn out later.

Eric manoevers us perfectly out of the marina and into the Adriatic Sea. While Eric sits on the tiller, the engine is humming and the headsail lights up white, I take care of the lines and bring the fenders in. The knots are partly difficult to open and I plan to take a look below deck after this fender to check the engine data (unfortunately they are still below deck) and to see if everything is ok with the cats. I have not finished thinking about the idea when Eric suddenly starts to speak loudly.

He pushed the sliding hatch back to take a look at the cats. Dense, brown smoke is coming towards him. Alerted, I jump up and rush to him. He’s already climbing down. I’m just calling him, “Take, bring me the cats!” and he’s already disappeared in the smoke.

I push my headband over my mouth and nose and also crawl down (stupidly in retrospect, in the worst case we both lie down there…) We both try to find the cats, Eric opens all the windows. Smoke comes out everywhere, looks as if the dream is over now, but we don’t think that far at this time. After a long time, probably only a few seconds, I find Summer and push her on deck. Where’s Randy? The visibility under deck has increased from about 20cm to about 50cm, so we find Randy and I put him in the fresh air.

All four of us are sitting outside, the engine is turned off, we are gasping for air. The cats seem very relaxed, I don’t want to know what happened in those poor things minds. Luckily they had a sheltered life and some of their 9 lives were still preserved.

Our throat still hurts a few hours later, the cats seem to be unimpressed and lying in the sun. After most of the smoke is removed, Eric removes the engine compartment cover and the first suspicion spreads.

The engine is no longer a helper, the foresail is slack in the doldrums – fortunately we are only going on extremely slowly. Every now and then a breeze comes, but it’s not enough to go further. the next anchorage at Marina Vrsar is within sight, but almost inaccessible. Before we drift any further, we’ll drop anchor. Water depth 30 meters, fortunately we have increased to 100 meters chain.

Near the land I still have connections with my mobile phone and call the insurance company for towing assistance. The discussion is tedious and not goal-oriented. But it takes long enough and the wind is picking up. Eric recovers the anchor again, I take care of the fore sail, together we want to set the main sail, but fate plays a trick on us here too. Like in a bad movie. We swapped the traps (the rigging) two weeks ago, we’re at a loss. Nevertheless, we make it into the anchor zone at the marina with aches and pains.

After the anchor touches the ground again, a motorboat swings towards us. Back up anchor, he’s hauling us into port. We did it. We’re safe for now. The towing aid costs 150 kuna, about 20 euros. We’ll be happy to pay for it. 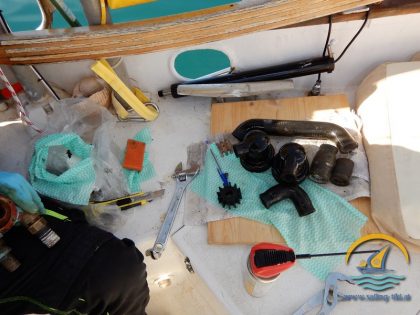 The drama started with the fact that I forgot to turn the blower on, it’s his job to air the engine compartment. But this was not all. One of the stainless steel hose clamps is torn. This caused the hose to detach from the internal cooling circuit and the engine cooling could not work. We have a Perkins engine with 2 cooling circuit chambers. The intern, who was now out of action, and the externals. The external cools the fresh water of the internal circuit with salt water. In our case, the internal circuit was empty, because the hose loosened. This made the engine much too hot and the oil that had accumulated in all the cracks and corners smoked inside the boat.

Eric is the hero 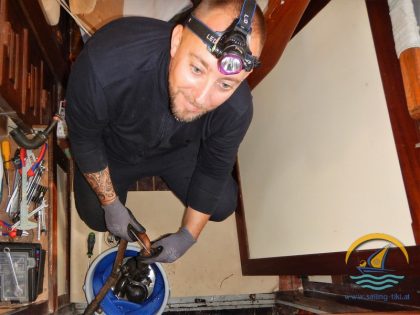 He disassembles the cooling circuit, and at the same time all hose clamps and the impeller are exchanged, seals are replaced, etc. at the same time. The local workshop is pleased about 300 EUR turnover. We have no other choice, and we don’t care about it right now. Currently, after almost 2 days of work he is now back on the assembly line. Hopefully Dorothy will purr (our engine already had the name) then again. We will continue with the mainsail and the anchor windlass will be connected now. Manual operation is possible, but now we are in full motion (or so…)

I am curious to see what surprises await us when having a close look to the main sail. It blocks at the height of the spreader, a little over half way. Up to now it has always been easy, but Murphy´s Law seems to be with us. Our brand-new water pump (for the bathroom) is also broken, but that can’t shock us anymore.

We won’t be able to get out of here so quickly, but there are already some things done that we wanted to do in Sicily. Well, the false start still has its meaning after all. 🙂 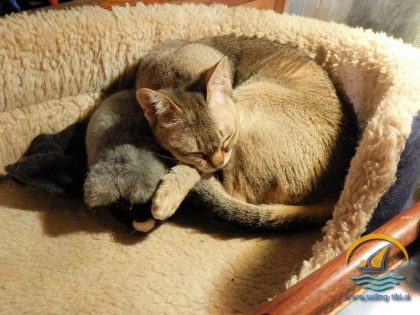 Oh well, the cats are doing great, they sleep in the sunniest places in between, they bump over us, come to collect caresses and beg for food. It’s all normal for the little ones. That’s the most important thing.