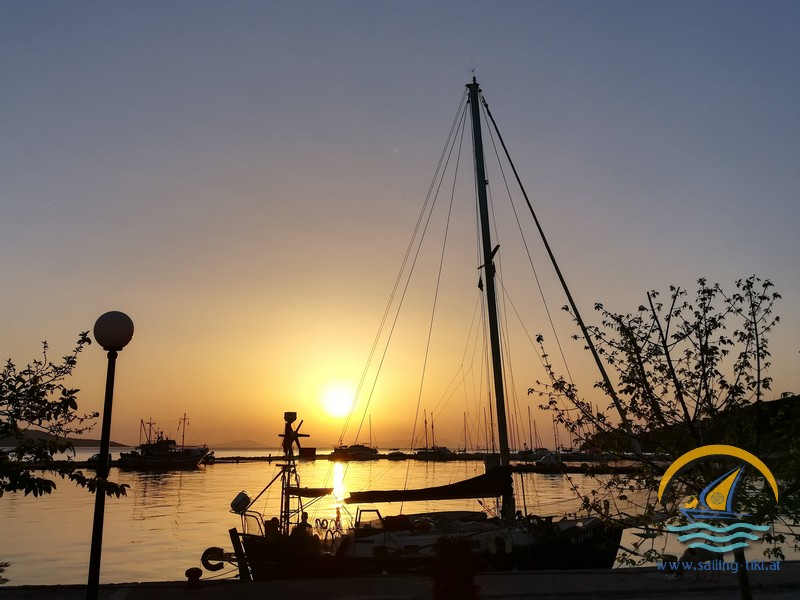 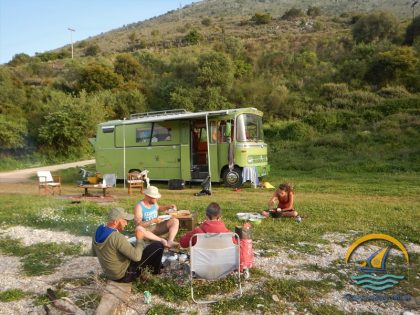 Since Dugi Otok we have stayed in contact with Kim&Giel, the last days have been more intense again, they are close by, we have to take advantage of that. Now that we are officially in Greece, equipped with DEKPA and thus able to move freely, we pick up the anchor early (or later, who knows) in the morning. 25nm to Plataria, on the Greek mainland. Kim and Giel see us long before we can recognize them. When we moored Tiki the joy of reunion is terrific and we have 1000 things to tell each other. Wolfgang comes a little later and so we spend 2 nice days together in and around Plataria. Of course the two land nomads don’t let the chance go by to go for a ride with Dolly and us, the ingredients for the evening BBQ on the beach have to be bought.

When we are back at the beach, with a view of the bay and Tiki, we cut our hair quickly (Eric, Wolfgang and I) and then go for a short dip in the water. At this time of year the clear, turquoise blue water promises much more than the temperature of 15°C can hold. The air temperature, on the other hand, is very pleasant and we enjoy a cosy evening at the campfire and barbecue our yield from shopping in the afternoon. When it is already dark, Wolfgang takes us back to Tiki with his dinghy, and it turns out that the lighting of the taverns on land is very misleading. Red-green lights, which normally mark the entrance into the harbour, are attached to the front of the houses and turn the entrance into a little adventure at night. 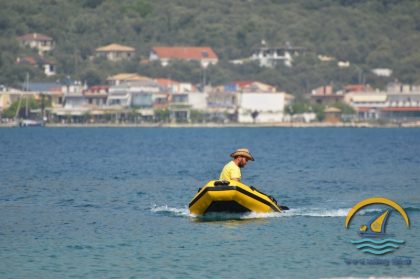 The time with Kim and Giel passes much too fast, as always. Unfortunately the two have to go on, the family comes to visit them.

ATTENTION to all who arrive in the darkness! The entrance to Plataria is NOT illuminated ( Status April 2018) and the breakwater is partly covered with water during high tide and can’t be seen either! At low tide it is mostly dry.

At “Ela” you can fill gas bottles and if you ask nicely, you can also fill the water tanks. We paid 12Eur for 3 nights (2+1 free), someone came to the boat and we even got a receipt. In the season you reportedly can take a shower at “Olga”. In April nobody was there. 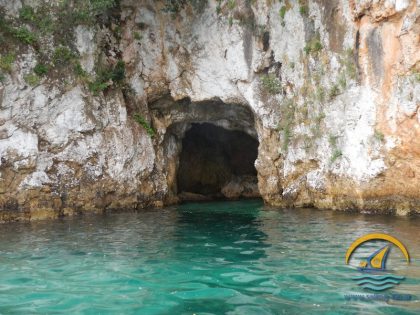 In the early morning, well, morning, of April 14th, we set off to visit the Blue Lagoon on the small islands situated in front of Syvota. The distance there is only 6.5 nautical miles, that is a quick one. Opposite the lagoon is a small anchor bay, just right for Wolfgangs Swing2 (a 26 Friendship) and our Tiki. For safety’s sake we bring out land lines. The water here is again outrageously beautiful and we decide to assemble our dinghy quickly and take a look at the surroundings. For the first time we test our outboard engine to chug the 1.3 nm into the village. There we treat all 3 of us to a scoop of ice. After we have looked around in this pretty little village for a while, we go back to the boats and our cats. We spend 3 nights here before we move on. Wolfgang stays one more night and almost lost his dinghy. Fortunately he is a good swimmer. When we hear the story from him later, we can come up with our own related story.

today we loosen the shore line in the bay, tie the Bananaboat, our dinghy, to be able to pull it and steer towards Paxos. The weather is fantastic sunny, the wind blows pleasantly and we can sail to the island.13.5nm separate from our next anchorage. No matter to who we talked about sailing to Paxos, everyone assured us that it would be a paradise. For those who know the “northern bay” there will be a

dreamy smile on their faces.

First things first. To tow a Bananaboat, a folding boat, is not so easy we had 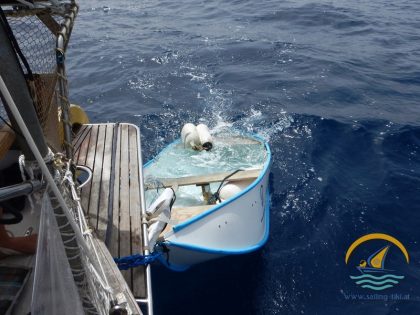 to learn. Of course we had dismounted the engine, luckily. I disappear briefly below deck, we turn around to climb down the small stairs, the companionway. I see a cheerful banana boat swimming behind us. A few minutes later, an outcry from Eric, the Dinghy ” drowned “. As a matter of fact, suddenly it is half filled with water, probably a higher wave. They come from behind on our current course and push us a little. We try, relatively unsuccessfully, to keep calm. A small change of course makes us slower, we hope to recover the dinghy more easily. Unfortunately this is wrong thought, now it is finally full of water. Good news is, we can now confirm, these things are unsinkable. Bad news is a boat filled with water is very heavy. In the picture we have already pulled it towards the boat, before it was much further back.

The salvage is difficult, we have put the foresail back, so Tiki drifts back slowly and smoothly and we can take care of the rest. As so often in such situations the good education is quickly gone to hell. There is swearing, 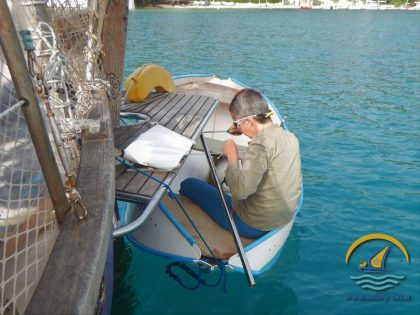 cursing, gasping, we pull on lines and I try, of course well

secured, to turn the thing around between the bathing platform and the middle of Tiki to reduce the weight from several 100kg to about 30kg. In principle a very ungrateful task, fortunately also this time there is a wave that wants to participate. At the right moment with all my might a jerk, and the boat turns the keel upwards, that water is out.

Eric’s arms were already trembling with effort and his palms were burning, he had been forced to hold it in position with a line. Now it is relatively easy, both shake their arms for a short time and with a last little effort the good piece is on board. Weeks later we learn from an elderly sailing couple that the banana has to be fastened as low as possible to the pulling boat, then it can be towed without any problems. In the meantime we have also tested this and can confirm it.

More about Paxos in the next article 😉