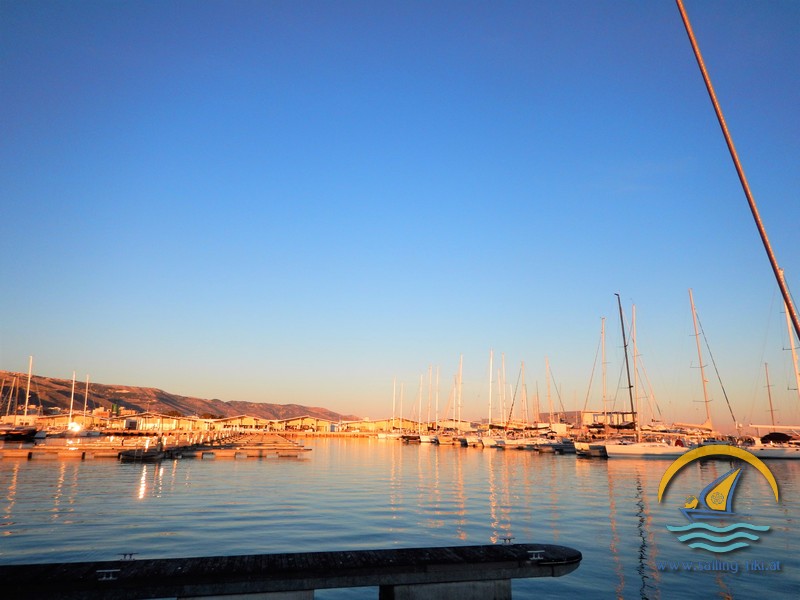 Now that we’ve left Lastovo behind, Eric is well taken care of on deck and I’m going under deck to stay warm, furthermore that the cats are not alone. Randy feels obviously more comfortable when one of us keeps him company, Summer is a cool sock that doesn’t “need” us. Except if it gets really uncomfortable, then both cats are happy when they get a place on our lap.

Eric is busy with the tiller, I spend the time with the cats below deck until the planned shift change. Our beloved Taylors-Heater is doing his best, but the temperature doesn’t rise above 17° Celsius. We don’t know an outside temperature, but even Eric is warmly wrapped, fleece is really helpful here. I still have my 3mm neoprene wetsuit underneath the oilskin so that it doesn’t get cold on my kidneys or legs. My oil stuff is second hand and a bit too breathable for my taste.

I step out, a little briefing and Eric disappears to warm up and rest a little bit. It’s still dark, not surprising, I know, I just wanted to mention it one more time. Now I have to take a few hours of steering, so we keep on track and have a look out every now and then. We are on the verge of international waters, and the shipping route for “the big ones” is also going along here. Otherwise it is probably not only dark but also wet. We are seen with our AIS (AIS stands for Automatic Identification System, so we see other ships on our display and are seen by the others)
Despite AIS, of course, you don’t want to go for it. It is extremely difficult, I would even say impossible in complete darkness to estimate the distance to a light in the distance (or nearby). Since neither mountains nor buildings are in the way, other ships can be seen from far away.

Only once a ferry comes close to me, evasive manoeuvring is of course already long in progress, but that takes much longer on the water than one knows it from the road. In principle everything is quiet (and dark, only if I haven’t mentioned it yet? 😉

Eric is hiding under the blanket on the bench, the engine suddenly howls loudly. Since I didn’t even have my legs close to our throttle lever, I can’t have reached it by accident. The engine is roaring, the speed increases considerably, smoke comes out of the exhaust pipe in dense steam, I can do what I want at the lever, nothing changes. Shit.

I’m knocking for help, Eric sticks his head out shortly afterwards. I’ll tell him to stop the engine immediately. No sooner said than done. Below deck there is also smoke, but from the heater, the engine has sucked in so much air, that the smoke has been drawn back in, not through the stove pipe. Open hatches, open engine compartment, ventilate, come to rest and search for faults. I’m a nervous wreck, I’m cold as hell and I could cry. In the middle of the night, in the middle of the Adriatic Sea, in the middle of the shipping route – not manoeuvrable. No engine, no wind. My (preliminary) worst case has just happened. This time Eric is the one who stays calm, apparently we work really fine as a team, if one curses, the other stays calm. Most of the time I’m more relaxed, it’s Eric’s turn today. 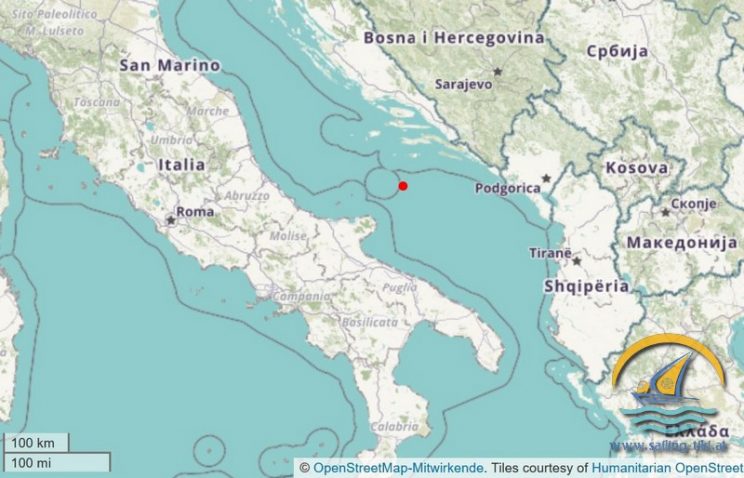 After we have waited a little while Eric takes a look at our engine. The little bugger, the engine, has experienced more affection in the last few weeks than in the last 30 years, but is acting like this… To despair. A spring is broken, from the throttle cable – therefore no reaction to the lever. That’s a bloody mess. Of course, Tiki now swings through the waves and gets shaken up. It’s pitch black all around us, we don’t even see the waves puffing through us in this conditions. It’s like there’s nothing left outside of Tiki. This doesn’t make it any easier, but on the contrary it makes it a little more frightening.

Eric has the idea to drop it.

He improvises with a piece of wire and we can put the motor back into operation at a fixed speed. The throttle is now useless, but we can manoeuvre again and keep our course. Over an hour has passed. I’m a nervous bundle, Eric picks up the tiller again and sends me to sleep. Below deck it’s now only 8°C, so I stay in my dry wetsuit and only take off the oilskin. Well tucked up and with both cats under the blanket I come to rest again and will probably doze away quite soon. Eric kindly lets me stay longer than I’m entitled to. But at 3:30am he woke me up to swap. I quickly get into the oilskin, go on deck and hook myself into the lifeline. One more short conversation and Eric cuddles up under the still warm blanket to the cats and falls asleep immediately.

I can guess the first glimmer of light on the horizon at 5:30am. Now it didn’t take long until the first outlines of Italy appeared, then some fishing boats – it’s daylight again, the land is in sight, I’m relieved.
When Eric sticks his head out a little later and we realize that we have eaten the roll of biscuits at night, we want to get some corn soup. I’ve been looking forward to it ever since we left.

What shall I say, today there’s just the bug in it, the corn soup has spilled into the sink. The lid must have loosened due to the swinging during the night. No warm soup. Just tea and a little something to eat.

After breakfast I call the Marina del Gargano in Manfredonia. Now that our engine is only more binaer, on or off, they have to tow us. No problem, they assure us that we should contact them in time on channel 74, they send Dario out in the dinghy and he will tow us in with the zodiac.

At 12:30 it’s time, in a few minutes we need Dario and the dinghy. A short radio message and Dario appears about ten minutes later. The first few meters he has to fight against the upconming waves, but shortly after that we have reached the protected basin of the marina. Andrea asks us if we need anything and apologizes because the pier is not clean. We have to laugh, currently Seagulls poo is our smallest concern. 😀
We’ll bring our ship’s papers to the Marina’s office. Afterwards we go to one of the few open restaurants and eat the worst French fries we have ever had. But cutlery and glasses are dusty as well, so why should we complain? For the place setting we get charged 2 EUR. We can’t pay the bill because they do not have the correct amount of change. After some back and forth we can pay with the card, go back to Tiki to heat up and get some sleep. Now it can only get better!

We made it, crossed the Adriatic Sea and arrived in Italy. You can soon read stories from Manfredonia in the next article. 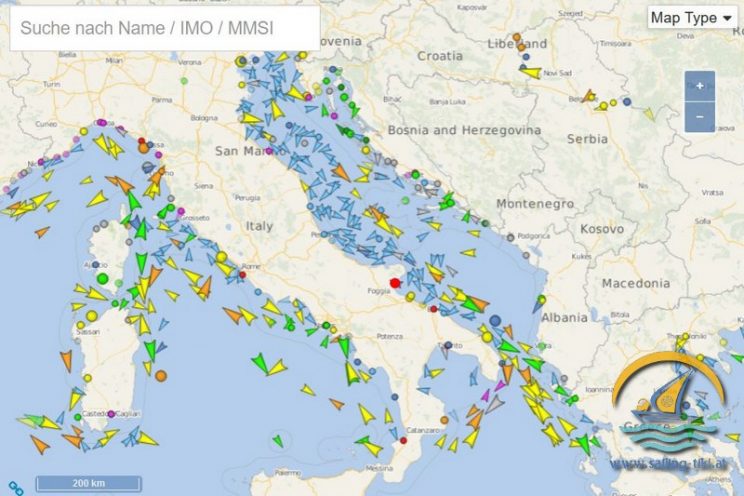 If you would like to search for us with the help of AIS, you can enter our MMSI-No.: 203 229 400 on pages like Vesselfinder, Marinetraffic or in the FindShip-App. Be aware that the position is not always correct in the online version. For example, we are currently in Manfredonia/Italy, but the location Online is still Korcula. Ship to ship always sees the current position when we are on the way.

2 thoughts on “It was dark, a new moon night”