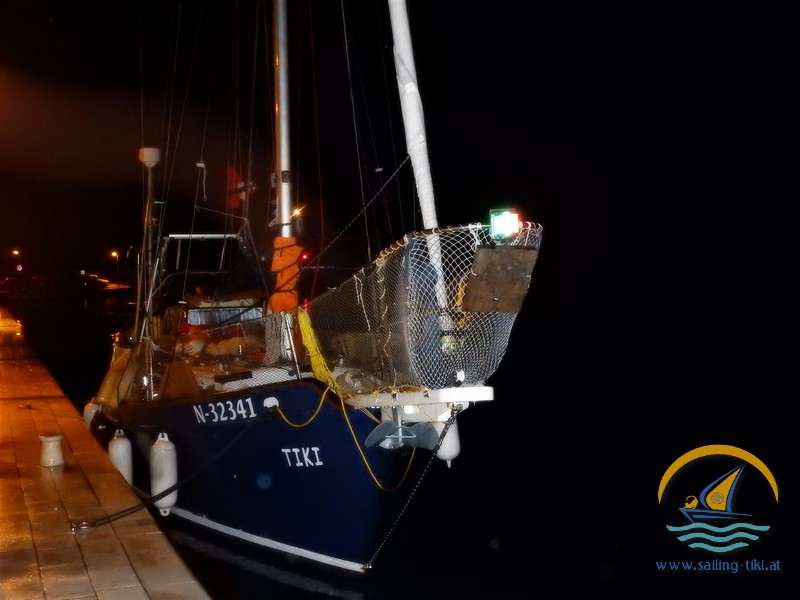 Tuesday 12 December, we’ll continue! As predicted it is a quiet day, the sea lies flat as glass in front of us, the wind is so weak that you hardly notice it. The sails will probably remain tucked away today. The trip from Zaglav/Dugi Otok to Muna on the island of Zirje we motor again. Sometimes you question the sense of the sails a little bit, we wanted to sail and not only motor. But it doesn’t help, we have to go to the south, it just getting too cold here. Thankfully only on deck. Below deck our Taylors-oven takes care of cosy warmth.

On the way the view often sweeps over the stern to the back. This doesn’t look so good. It is dark and misty, you cannot see where the sea stops and the sky begins. We run away from the bad weather. It will be a close race, but in the end we emerge as winners and the clouds are beaten.

Muna is again such a nice little picturesque bay, we land alongside and stretch our legs as it starts to drizzle. Just in time. A short walk around the bay and back has to be done anyway. As soon as we are back on the boat the sky shows us that he can do something else (but apparently waited until we are safe) and it starts to pour everything he kept. After a short time it changes into normal rain and so it will remain a very restless night. 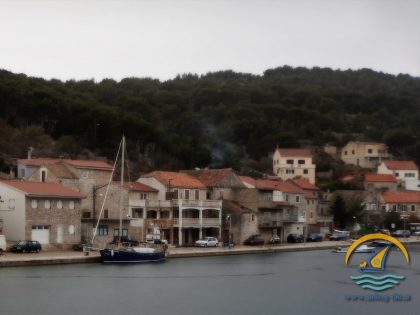 Wednesday December 13th, dark outside, Randy and Summer are confused. They usually wake us up around eight o’ clock for breakfast. Today life on board starts at 5:30 am, which is clearly baffling our cats. Helplessly they tap around, clearly aimless. Eric drinks a few sips of his coffee and we’re ready to go. Today we want to go to Vis, that’s about 43 nautical miles (78 km). At a speed of approx. 5 knots, this means a good 8 hours. Since we want to arrive safely in daylight, we have to leave in the morning darkness.

I’ll fix Eric some breakfast sandwiches and give him his coffee. Then I can lie down again, I have to take the job later and be fit. As the night was restless, I could hardly sleep and now I want to make up for it. As soon as I have cuddled up again and try to sleep a little bit in spite of the humming engine noise I hear Eric calling me over the walkie talkie. I have to get out, I suspected something like that because it was a bit bumpy, similar to a fast-paced ride over sticks and stones, only just on the water, caused by waves.

I quickly slip into my pants and put on my jacket. Randy’s in trouble again today, I’m afraid. After they should get breakfast later he helped himself to a piece of cheese and unfortunately he couldn’t keep it. Poor little fellow. Summer is much more relaxed and doest away. It’s really bad today, though.

As soon as I put my head in the fresh air I see the reason. The dusk has now set in, and I can clearly see the restless sea. Crossing waves, waves up to 1.5 meters high come in short distances from 2 sides and puff us through. I take over the tiller and Eric hooks himself into the safety line before he goes to the bow to set the jib, our 8m² storm sail.

With that, Tiki stabilizes a little, but we are far away from a quiet ride. In irregular intervals we get a small seawater shower. I’ll stay outside for a few minutes to see if I’m still needed. Together we realize that I can’t do anything about it, so I go back below deck to warm up and check on the cats. Eric had plenty of time and a quiet ship to dress warmly before setting off. Later I was quite happy that I could pull my pants over it. Standing under deck was not possible and to get through the boat I had to hold on with one hand somewhere. I get the rest of my bad wheater gear together and try to get in as fast as possible. Put on the hood, have a drink and get out.

I’m a bit better equipped now, I sit opposite Eric, everything is wet – luckily we have the good stuff on. It is still not warm, but at least so far dry. At least I thought so. Until the time I found out that I’m getting pretty cold down there. My pants are not waterproof anymore, I have a wet butt. When I crawl back down after some time I decide to turn the stove off. After the wind turns a little bit, we can’t turn the opening of the chimney away from the wind and I want to avoid that the smoke is pushed down into the cabin. Fortunately, it doesn’t cool down that fast.

A little later, after a look at our cruising speed, we consider whether we should not go to plan B and head for Rogoznica. At the moment, with wind and waves against us we make only 2 knots, Vis is to be guessed on the horizon, but not easy to reach under these conditions. We want to enjoy our journeys and not force them. We have so much time. New destination: Rogogniza, mainland Croatia (Between Sibenik and Split) The course change makes the waves much more bearable and we are at our destination after about 3 hours, agonizingly slow. In the meantime we had to take some seawater showers and a tough tour of the tiller. As soon as we reach the bay, the wind is no longer noticeable, the water is calm and we are looking for a place to moor.

After a short consideration we are directly attached to the pier. A helpful passer-by has the lines tossed in and picks us up the moorings. At first we thought that he would also be responsible for the berth fee, but after we were properly hung he wishes us a nice day and sets off. Again, this is another fantastic picture here. Opposite the marina is a dense forest of sailing poles and several luxury ships. We check all the lines again and decide to take a nap.

In the afternoon we do the obligatory exploration walk and buy some food again. We finish the evening in a small restaurant with tea and hot chocolate. There’s pancakes on board later. Jackpot!

Afterwards we fall into bed completely exhausted. One of the ceilings is outside for drying and airing. Randy has unfortunately got a bit of it with his leftover cheese and we have to get the smell out first. At least now we know why we have so many blankets. Preparation is everything!

The next day, December 15th, after 4 weeks, I finally have a decent internet access and can upload posts again. Unfortunately there are hardly any photos this time, please forgive me! I hope you weren’t worried?

One thought on “Leaving Zaglav”